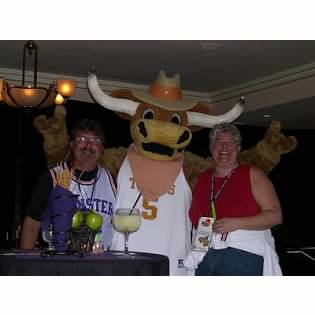 I don’t know why I care. I don’t usually watch college basketball. I was never a big fan of basketball growing up – I was terrible playing the game, the Utah Utes were not a major force while I was at university, and the Utah Jazz had not become a reality during my childhood. We don’t watch pro basketball on a regular basis, partially for reasons Pat explained yesterday. So in terms of sports fandom, basketball just isn’t there for me.

But I do care. I love March Madness. I loved it even before Pat and I were invited to attend the Final Four in San Antonio many years ago. But that did it – attending the games live was an amazing experience and we were very lucky to be invited. The games were nail-biters. There were Cinderella teams that made an impact on the Final Four. All the excitement and drama of the NCAA men’s basketball tournament was on display for everyone’s enjoyment. The hoopla surrounding the event shut down downtown San Antonio. The Riverwalk was full of jerseys and team mascots. It threw me over the line of sanity and brought me into full raging, rabid, bloodshot-eyed madness. I was the person you couldn’t call on Thursday – that’s right. I didn’t answer the phone because the games were on. I listened to the commentators. I cried when teams I picked won. I cried when teams I picked lost. I was mad; Mad Hatter, white-rabbit, over-the-top mad.

I dutifully fill out my bracket each year. I study the teams as though I’ve been watching the games all season. I base my decisions on all the noise coming from ESPN, FoxSports, and this year, NBC Sports Network. I study the injuries. I look at the coach’s records. I listen to their interviews. I listen to the players and watch their faces for any nerves. I predict Cinderella wins. I scribble in favorite’s losses. I build a bracket each year that I believe will reach perfection.

And I wait. I wait for the hammer to fall and crush my bracket to smithereens. And of course, I am rewarded with the arrival of the Mercers and North Dakota States. I watch as my bracket app fills with red rather than green. I watch my points and percentages go down. My PPR drops like a rock. And I marvel that at this tournament, in this setting, the little guy really can defeat the giant.

That’s what makes this tournament so riveting, even for those of us who are not invested in college basketball. The shockers. The incredible, last-second wins by a team who just barely made it into the dance and who should be down by 25 points to the big-budget, perfect-record team. It makes my heart warm that Underdog really does exist, at least in the NCAA men’s basketball tournament.